Just How Unaffordable Are UK Homes?

It’s a subject close to the heart of so many millennials I know – just how to afford a home of their own. In some of the more expensive parts of the country young people believe home ownership is an unrealistic dream.

Let’s take a look at the figures on UK house price affordability.

The graph above show that for first-time buyers the average cost of a home is more than 5  times the average income (data from 2017). This is approaching double what it was at the end of the 20th century.

Clearly there are some regions where the ratio to earnings and house prices is even higher, especially in the South East of England and in London where the average house price is more than 10 times to average salary. At those ratios it is almost impossible to save for a deposit or secure a mortgage at those levels.

UK house prices changes in the past 40 years 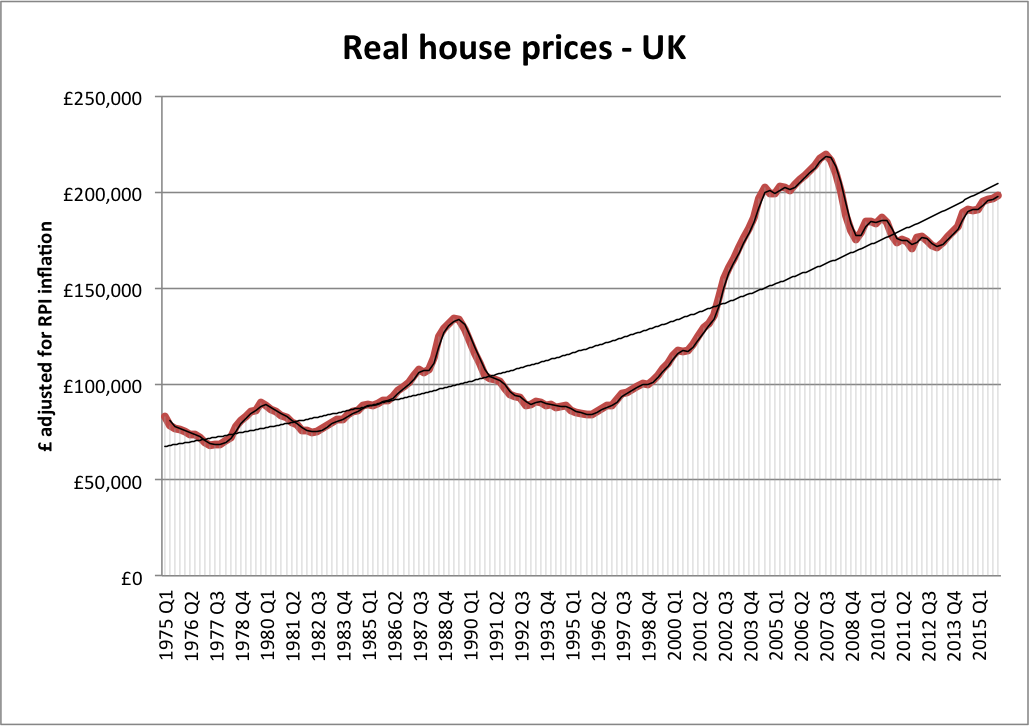 This above graph shows average house prices adjusted for inflation in the 40+ years since 1975. Taking a couple of examples from that period and using data from the Office for National Statistics  ONS we can see that:

Ironically, the historically low interest rates that we have experienced since 2008 (as shown below) have meant that those who already have a mortgage have benefited from very low-interest rates. So mortgage payments have typically been lower than the rent on an equivalent home.

And as house prices have risen and lenders have tightened their affordability criteria, much larger deposits/down-payments are required and people who could afford mortgage payments are unable to secure a mortgage from a mainstream lender. 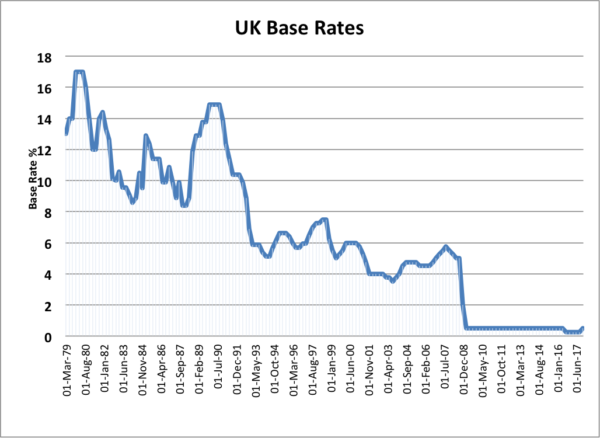 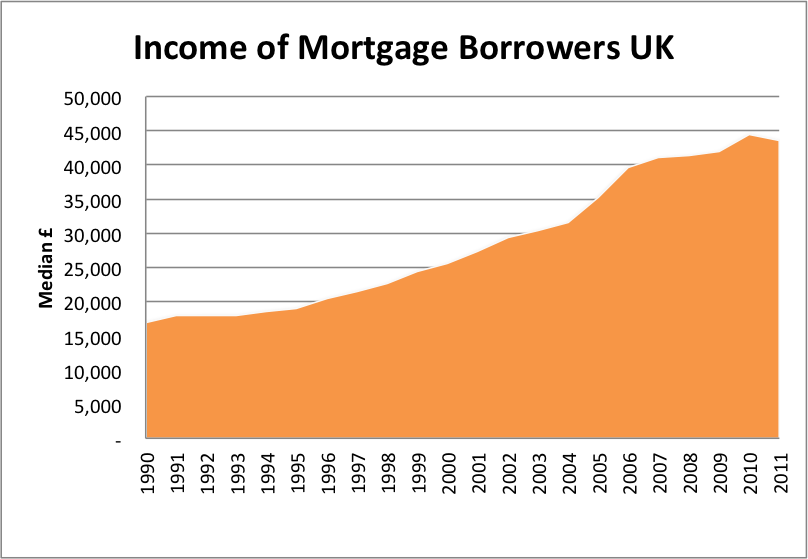 The graph above highlights the substantial increase in average salary for those taking out home loans. 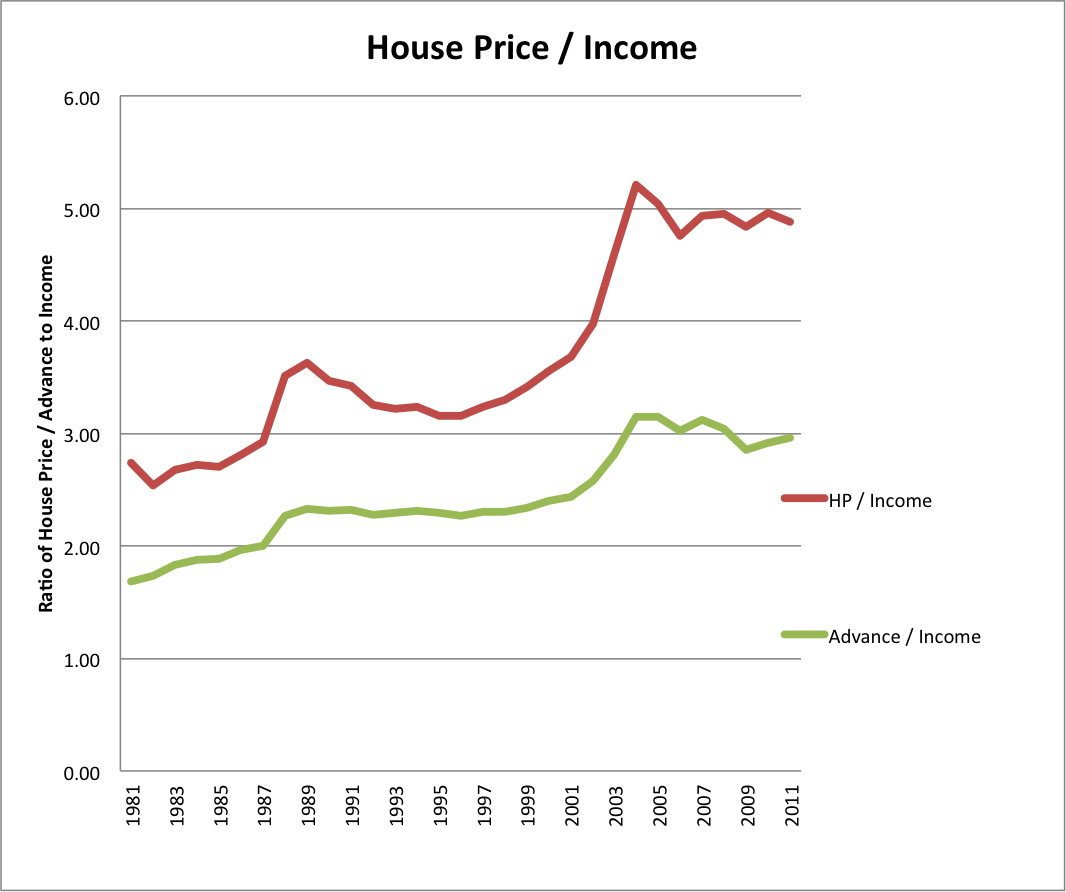 A very real problem is how affordable it is to buy a home in the UK and the graph above, based on a mortgage survey by the Office for National Statistics, shows how average house prices have changed over a 30 year period.

It is interesting to note that after a peak at a ratio of over 5.0 in 2007, there has been little change in the ratio of the average cost of a home to the average salary. However, what the data above also shows is that the average amount borrowed (advance) to purchase a home has risen substantially. This is a key reason why the average salary of those with a home loan has more than doubled in recent years; leading us to conclude that only those on higher salaries are able to buy a home.

This means that the UK has become one of the least affordable places to buy a home – and even those able to make a home purchase in the UK will be getting far less space inside and out for their money. In the vast majority of regions in the United States the size of the average home is much bigger than in the UK and even in relatively nearby European countries buyers will either be able to buy a much larger home for a similar sum or will get the same amount of space as the average UK home for far less. Of course moving to Europe would almost certainly require learning a foreign language.

Other Reasons Homes in the UK are Unaffordable

The simple fact is that for many young people in the UK today buying a home of their own is increasingly difficult and many only manage to do so with financial assistance from parents or grand-parents. And where family cannot help out financially they are helping out by adapting their home for multi-generational living so their offspring have some security in the place they live rather than renting from a private landlord where they can be given short notice to move out.